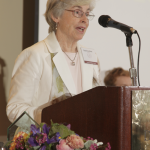 Little Rock, AR – Suzanne Hicks of Little Rock was recently recognized for her many contributions to her community by receiving the Arkansas Medical Society’s 2013 Shuffield Award. The award was presented on Saturday, May 4, as a part of the society’s 137th Annual Meeting.

Suzanne Hicks is the president of the Arkansas Down Syndrome Association (ADSA).  She has been a tireless advocate for the creation of a medical specialty clinic to care for people with Down syndrome and other genetic conditions and has pioneered her efforts to improve healthcare and social opportunity for people with developmental disability in Arkansas. Her decades-long goal of achieving a genetics specialty clinic was realized in 2009. This clinic, which also fosters research and teaching, is housed at UAMS and is the largest adult genetics clinic in Arkansas and also the mid-South. Mrs. Hicks continues to pave a new road for how both society and the medical community can view people with Down syndrome and continues to educate patients, elected officials, caregivers, and the community.

The Shuffield Award is the highest honor in the medical community for a non-physician. It recognizes an Arkansan who has done outstanding community work in the health care field. The Shuffield Award is named in memory of Doctors Joe and Elvin Shuffield, a father and son physician team from Little Rock, who devoted their lives to improving the quality of health care in this state.

The Arkansas Medical Society is a voluntary professional association, established in 1875, representing more than 4,000 physicians and medical students as well as the patients and communities they serve.