Authors: Nathaniel Smith, MD, MPH and Gregory H. Bledsoe, MD, MPH  | As seen in the November issue of the Journal of the Arkansas Medical Society.

What is “medical marijuana”?  To respond to this question meaningfully, we must first define terms.

Marijuana contains over 80 different cannabinoids in varying concentrations and proportions. Some of these have been or are being developed for medical use. Marinol (dronabinol, delta-9-tetrahydrocannabinol [THC]) was approved by the US FDA in the 1980s for management of AIDS-related anorexia and chemotherapy-associated nausea. Sativex (nabiximols) is comprised of THC and cannabidiol (CBD) in roughly equal proportions and is approved in Europe for treatment of spasticity associated with multiple sclerosis. Clinical trials are currently underway by GW Pharmaceuticals testing the efficacy of Epidiolex, a purified CBD extract, for treatment of pediatric epilepsy (http://www.gwpharm.com/Epidiolex.aspx ). Unlike THC, the main psychoactive cannabinoid in marijuana, CBD does not produce euphoria or intoxication.  Although these pharmaceutical products are derived from marijuana, they are not what is referred to as “medical marijuana.” 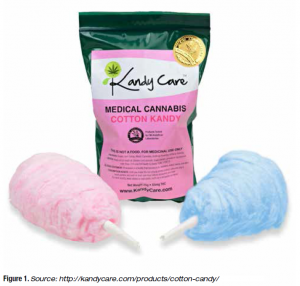 In contrast to the pharmaceutical grade marijuana derivatives that are FDA-approved or are undergoing clinical trials, non-pharmaceutical grade marijuana products have no FDA-approved indications, no robust data on safety or efficacy, and wide variation in concentrations and proportions of various cannabinoids.  Dosage is difficult to titrate for raw marijuana products because of variation in concentration of THC, but marijuana extracts have more predictable THC concentrations and come in a variety of forms and packaging (figure 1).  Collectively these are classified as “medical marijuana” or “medical cannabis.”

Non-pharmaceutical grade marijuana products (“medical marijuana”) have a number of potential therapeutic benefits and have been used as antiemetics, analgesics, anxiolytics, and anticonvulsants, although the safety and efficacy of these products have not been well-studied.  Potential toxicities include acute and chronic cognitive impairment, acute and chronic lung injury, and exacerbating certain mental health diseases such as schizophrenia or bipolar disorder.1,2  The sedating effect of marijuana also decreases mental alertness, increases the risk of motor vehicle accidents, and has additive effects when combined with alcohol.3

On a population level, potential public health benefits might include better control of cancer-related symptoms and other severe illnesses, although only a small percentage of “medical marijuana” use has been for serious or life-threatening conditions. Reduced pharmaceutical costs have been observed in some states that have legalized “medical marijuana.”4  However, no data on the comparative efficacy or safety of these products were reported, so it is not clear whether the lower pharmaceutical costs are associated with equivalent therapeutic outcomes.  States that have legalized “medical marijuana” generally have higher rates of prescription opiate use and overdose, but there is some suggestion that these rates have declined after “medical marijuana” legalization.5,6

A number of public health hazards have been observed after legalization of “medical marijuana.”  Unintentional poisoning from edible marijuana products (“edibles”) have been observed, especially among children.7,8  Since many of these products are formulated as candies (figure 1) or other dessert items (e.g., brownies, cookies), they are particularly attractive to small children.  An increase in impaired driving and accidental injuries related to marijuana intoxication has been observed after legalization of “medical marijuana.”8  Marijuana use for medicinal purposes may also impact employee performance and work safety.  Diversion of legally obtained “medical marijuana” for non-medicinal use is a particular concern, especially among adolescents.  In a study from Colorado, 74% of adolescents in substance abuse treatment had used someone else’s “medical marijuana,”9 and adolescents who habitually use marijuana demonstrate permanent cognitive impairment based on longitudinal studies.2

Product contamination with pesticides, mold, or bacteria is another public health concern.  Laboratory testing protocols for detecting various contaminants and assessing the concentration of active ingredients (i.e., THC concentration) have been developed.10  However, large-scale testing is costly, and it may be prohibitively expensive to test a meaningful sample given the wide range of products and producers.  In states that permit individuals to grow their own marijuana plants for medicinal use, testing for product safety would probably not be feasible.  There are also occupational hazards related to production, which may involve flammable solvents used to extract hemp oil.  Federally insured banks are prohibited by law from dealing with funds derived from marijuana production or distribution, and some states have reported violence-related injuries or deaths due to security issues related to this cash-only industry.

Another concern has to do with the public health implications of bypassing the FDA approval process for certifying products for medical use.  For most of the past century, certification of pharmaceuticals for human use has required clinical trials data establishing safety and efficacy.  Previous to these standards, medicine was practiced based on anecdotes and testimonials.  Even dangerous and ineffective treatments, like bloodletting, had strong proponents and were practiced for hundreds or even thousands of years.  Certifying marijuana or any other substance as medicine by ballot initiative or legislation rather than by scientific evidence should be of serious concern to the medical and public health communities.

There are alternatives to legalization of “medical marijuana” in Arkansas.  Increasing access to pharmaceutical grade CBD oil for research and compassionate use would provide a higher quality product for managing intractable pediatric seizures and would contribute to scientific understanding of the benefits and risks of this treatment.  The Mississippi legislature passed legislation in April of 2014 approving the University of Mississippi Medical Center to dispense CBD oil for the treatment of epileptic seizures in children. However, major regulatory requirements still exist before patients could receive the potential treatment in a carefully controlled clinical trial (http://pharmacy.olemiss.edu/ncnpr/research-programs/cannabis-research/).

Patients with serious medical conditions require medication that has been proven to be both safe and effective and for which the dose can be titrated to the patient’s needs and tolerance.  The most effective method we have to assure that marijuana-derived products meet these criteria is the FDA approval process.  As mentioned above, CBD and other marijuana-derived products are in various stages of testing and may eventually yield FDA-approved treatment options.

While there is evidence that now suggests that cannabinoids may have beneficial clinical uses, the proposed initiated act is one of the most comprehensive, including over 55 conditions and/ or symptoms. The proposed constitutional amendment (not yet certified for the ballot) contains a much smaller number (11 conditions or related symptoms).

There is huge potential for legal cannabis to be diverted to uses unrelated to medical care, especially among young people. This will add to our already growing problem of prescription drug abuse and the enforcement of illegal drug laws.

Unlike FDA approved medications, cannabis has not been subjected to rigorous testing to determine proper dosing levels, and methods of administration. There is no way under the various state based medical cannabis laws, that dosing levels can be controlled, particularly with smoking as the most common form of use. We remain concerned that after decades of fighting tobacco use, it is contradictory to now suggest that smoking marijuana will not create many of the same respiratory problems created by smoking tobacco.

AMS believes that given the potential for cannabis to help alleviate some conditions and symptoms, it is time for federal officials to lift the Schedule I classification and create an avenue, along with appropriate funding, to conduct well-designed clinical research that will enable cannabis and its related components to be treated like other prescription drugs, available in dosage controlled delivery systems and subject to the same rigorous product safety testing that we expect from our prescription drug system.