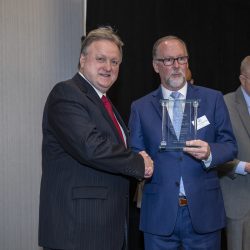 The 2019 Asklepion Award winner is David C. Jacks, MD, FACS, from Pine Bluff. He earned his medical  degree and completed his residency in urology at the University of Arkansas for Medical Sciences (UAMS), Arkansas Children’s Hospital and Veteran’s Administration Hospital. Dr. Jacks is certified by the American Board of Urology and is a Fellow of the American College of Surgeons.

Dr. Jacks founded South Arkansas Urology in 1981 where he remains in practice today. He is an active  member of the medical staff at Jefferson Regional Medical Center and has served as chief of staff, chief of surgery, and on many other committees throughout his career. Dr. Jacks serves as Clinical Assistant Professor of Urology at UAMS in Little Rock and the UAMS South Central Family Medicine Residency Program in Pine Bluff.

Dr. Jacks was a member of the Arkansas State Medical Board for 16 years where he previously served as member representative, secretary, and vice chairman. He has served on the Arkansas State Legislative Oversight Committee on Prostate Cancer since 2001. He is a 34-year member of the Arkansas Medical Society and has served in several capacities within the organization including president in 2008-2009, treasurer, delegate, and on several committees. Dr. Jacks remains involved in the Arkansas Urological Society, Arkansas Caduceus Club, Arkansas Foundation for Medical Care, Southern Medical Association, and the American Urological Association.

Dr. Jacks is married to Donna Schwab Jacks and has three children. The Asklepion Award, named for the Greek god of medicine, honors an AMS member who promotes the art and science of medicine and the betterment of public health; embodies the values of the medical profession through leadership, service, excellence, integrity and ethical behavior; and serves the community through dedicated medical practice.

Check out all the photos from the Awards Luncheon here.

‹ Back to All News

Board of Trustees Meeting

Physicians of the Future Region 3 Summit